Part 1 of the "Shape-Shifting" Series: A Behavioral Team Coaching Model

Welcome to the first of my five-part monthly series on the concept and philosophical science of “shape-shifting.” Now, in modern terms the definition of this word certainly lends itself to many interpretations. But, as my professional title and practice would indicate, my intention is to hone the focus of shape-shifting as it applies to the field of coaching, more specifically the growing practice of team coaching, and its application as a behavioral model for education, practice, and research.

Many people with whom I’ve worked as a coach and/or coach educator have heard me recount how often I have been asked by my my executive clients, “Can you coach my team too?” So began an exploration and discovery process into the science and methodologies of team coaching; one that in its genesis yielded very little in the way of documented research and historical data.

In my research and discovery I found that most often the term "team coaching" had been positioned in literature as a practice primarily conducted by an internal manager who tends to have direct authority over the team, the ability to provide (or take away) resources and compensation, and make decisions on behalf of the team.

More recently, external coaches have been hired by organizations to provide coaching for teams and team leaders. But almost no literature existed about the work of external coaches, specifically their behaviors when interacting with a work team, even though 85% of all coaching services are conducted by external coaches (International Coach Federation). So what do coaches actually do when coaching teams? What influences the coach’s choices of actions and behaviors when coaching a work team? If these questions were answered, what implications may exist for practitioners, educators, and researchers?

Thus, in 2012, I conducted the first empirical research study to learn about the work of external team coaches. The study examined what an external team coach actually does and what influences the coach’s choices of actions when working with a team. The study went further, culminating a new framework called Shape-Shifting: A Behavioral Team Coaching Model for Coach Education, Research, and Practice(referred to in this post as simply Shape-Shifting). The study findings were synthesized and integrated into an overarching theme of shapeshifting (McEldowney, 2002), meaning “an archetypal metaphor for transformation and change” (p. 224). It depicts the adaptations the coach makes in behavior during individual interactions as well as throughout a coaching engagement as a means for supporting the growth, development, and change in a work team. 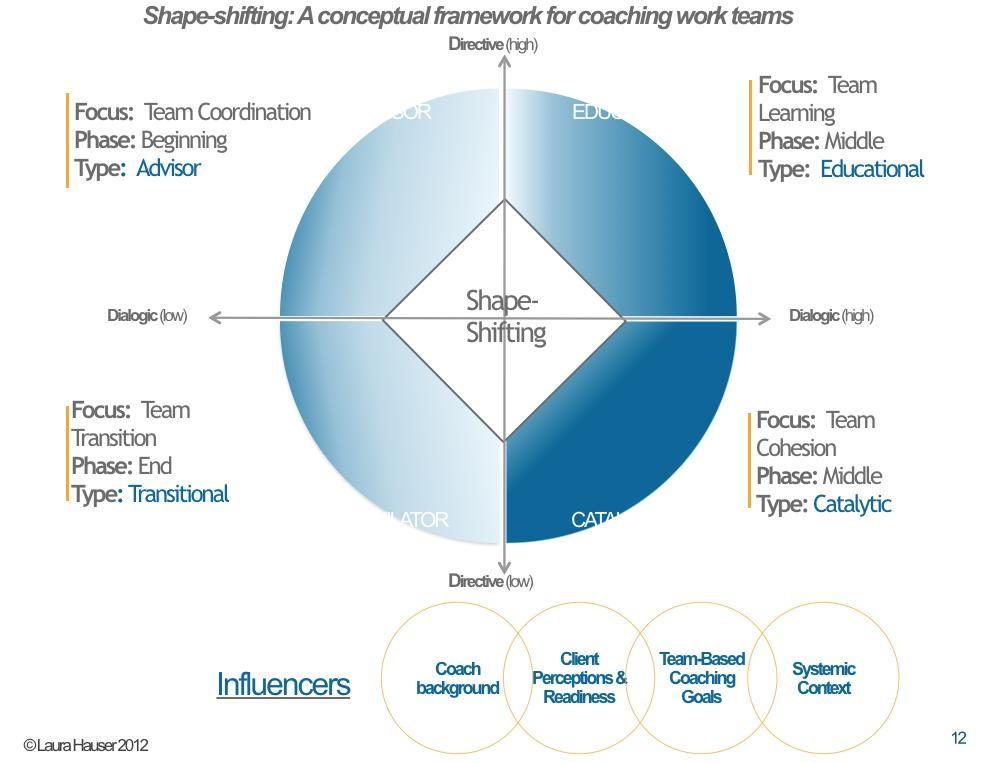 Underpinning the four role-behavior quadrants are four key domains that influence the coach’s choices and decisions about knowing how to enact a certain role behavior. These four domains include coach background, client perceptions and team readiness, team-based coaching goals, and systemic context.

As the coaching field matures, the demands for coaching are shifting, as are the ways in which organizations are conducting their business. If coaching serves as a process to support transformation and change, then the construct of shape-shifting aptly characterizes the coach’s ability to shift (change at will) one’s shape or form. This suggests that the shape of a coach’s action in any given moment is informed and influenced by factors that exist within the contextually complex coaching engagement and environment.

If you are ready to increase your confidence and competence to coach teams, send an email to [email protected] and type “TEAM COACHING OPERATING SYSTEM TRAINING” in the subject line to learn about our three-day team coaching foundations workshop.